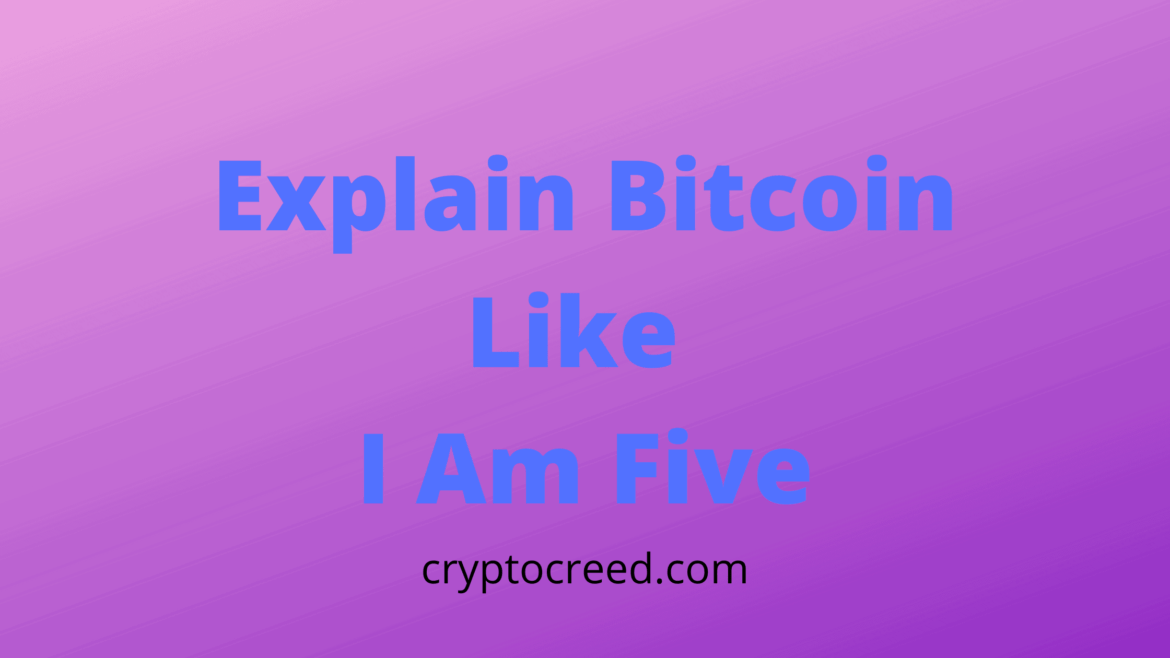 Last Updated on January 31, 2021 by cryptocreed

Welcome to the series of ELI5 of the Bitcoin world. Understanding Blockchain and Bitcoin requires a bit of technical knowledge at first. As a non-techy guy, it is hard to understand maths & technology used behind the cryptocurrencies world.

When you heard about Bitcoin for the very first time you might think that it is a just online currency that works as a point system works in games or the person who depends on the cash might think that Bitcoin is just a scam. Everyone has their own way of thinking.

In ELI5 Bitcoin, I will tell you what is Bitcoin in a simple way.

In 2014 Newsweek reporter claimed that Dorian Nakamoto (a Japanese American resident) is the real Bitcoin founder. But he declined that.

Even the picture is circulating on the internet is of Dorian Nakamoto but not of Satoshi Nakamoto.

In my opinion, it is better that, no one knows the real Satoshi Nakamoto.

In simple language, Bitcoin is a currency like USD, GBP, or INR but the difference between USD and Bitcoin is you can touch the USD physically whereas it is not possible to touch Bitcoin physically. Because it is a digital currency and it is like air, you can feel the air but can’t touch air.

There are two keys that matter while creating your own Bitcoin Wallet, first is Private Key and Second is Public Key. The Private Key is your password, it allows you to log in your wallet. The Public Key is like your Bank Account Number, when someone wants to send you BTC then he needs your BTC address at first. You can find the public key on your wallet.

The system which we call blockchain and it’s nodes allows users to send bitcoin without any third party interaction. Did you ever send a message to someone? Yeah, you did that. It is the same. In a message, when you send “hi” to someone. It touches three people sender, receiver, and server. In the same way here “hi” is your amount.

There is a sender who enters the receiver’s BTC or Bitcoin address and then enters the amount which he wants to send and just click on the send. The first Bitcoin transaction was done between Satoshi Nakamoto and the late Hal Finney.

How Bitcoins are Created?

This is the question that every newbie has, if no one has control over Bitcoin then who creates it? Bitcoin is created through the programming language and solving math equations.

Wants to know how Bitcoin Mining works? Click here to know it. Then read this article.

Is Bitcoin is Safe?

At first, it is safe as it is a transparent (anyone can check balance, transaction, and fees), secure (if you have your private key then no one can breach your security), fast (it depends on the fee size and block, use transaction accelerator to boost transaction).

Since the launch of Bitcoin, it amazed the many people, and since 2014-15 many big companies started accepting Bitcoins too.

Wants to know more about Bitcoin then read the article published by our friend on ELI5 Bitcoin.

Conclusion: If you liked the ELI5 Bitcoin article then do not forget to share so more newbies can understand what is Bitcoin.

The Bike that Earns Cryptocurrency as You Cycle