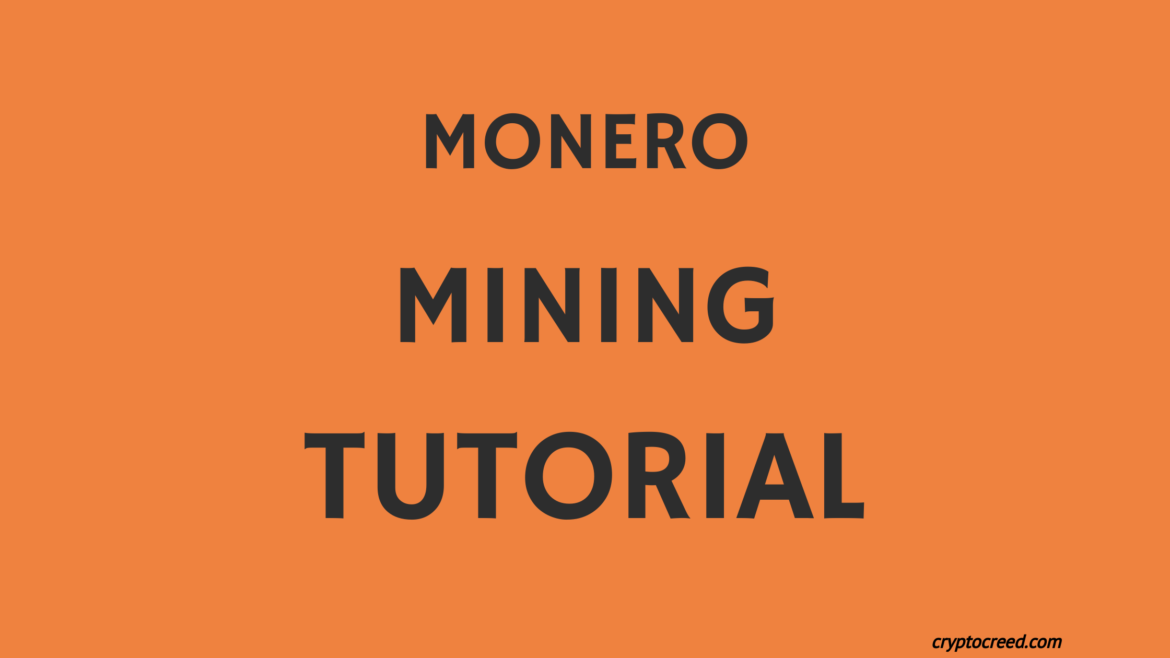 Last Updated on January 31, 2021 by cryptocreed

Having touched above the 100-dollar mark, you can’t deny that Monero is a cryptocurrency with potential. The cryptocurrency’s main goal was to provide even more privacy than Bitcoin offers and as that is what most crypto-users (besides the trader population) want, it’s not really a surprise that Monero is a top player in the crypto markets.

Although there are cryptocurrencies that are currently more valuable than Monero, mining Monero instead of other altcoins carries a great advantage to it: CPUs still works great on it! It’s a rare case where CPUs can actually compete with the GPUs. If you look at Bitcoin, it’s pure ASIC mining. Even a GPU won’t be able to touch the terahash level of mining that the ASICs have passed long ago already at Bitcoin. Bitcoin’s small, but lethal, rival, Ethereum, has proven to be incapable of keeping CPU mining worthy as well. Although ASICs are not dominating Ethereum (yet), CPUs just don’t stand a chance against the power of GPUs.

Monero is different. Monero isn’t dominated by ASICs nor by GPUs. Both CPUs and GPUs work great for mining Monero, which allows for a wide variety of mining devices to join the playing board. In this article, I will be providing more information about Monero Mining, how to do it yourself, and some recommendations.

“Get 1% daily” This is one of the most standardized examples of a Cloud Mining advertisement. Believe me: These are not worth it. Anything offering you 1% daily is a scam. There may be exceptions, but it’s impossible to know what is legit and what’s not. Besides, what company would give you 1% daily if they could just use it themselves?

Some Cloud Mining companies might be legitimate companies, which also offer far fewer profits. One of these companies is Genesis Mining. HashFlare is another example, although there are some doubts about both of them, especially on the latter.

In five simple words: Stay away from Cloud Mining.

Although the real mining process takes a bit more effort than the simple Cloud Mining opportunities that are crowding the internet, it’s also much more rewarding. Not only would you remove the fee the Cloud Company is charging you automatically because they obviously want to stay alive and have to pay their personnel, but they also carry a large risk with them.

As you see, real Monero mining is definitely worth it a lot more than Cloud Mining. In the rest of this article, I will be explaining more about mining Monero.

In how to build an ETH mining rig, I gave a detailed explanation of how to build an Ethereum mining rig and what hardware to choose. For the Monero mining rig, mostly the miner itself (CPU/GPU) is different. As I will only give advice about CPU/GPU here, I recommend you check that previous article out as well, for advice about other necessary components of a good mining-rig, which include the motherboard, memory, etc!

Now to the miner itself, the CPUs and GPUs. Although GPUs often have a (much) higher hash rate, the power consumption and price of CPUs is often far lower. A good site for performance comparison of different Monero Miners is https://monerobenchmarks.info. As you see, there are great GPU/CPUs in the list, although you must consider that they might’ve been overclocked to have reached that result, might cause unexpected maintenance costs, have a high power consumption and the price could be quite high if they are popular.

Now that doesn’t mean the Intel Xeon is 50% better, but it does mean that it will give you more profit if you buy so many of them that you achieve the same hash power as its rival. It’s important to notice that some of the miners listed on https://monerobenchmarks.info/ also have some issues causing them to cost extra money due to bugs, maintenance costs, extra electricity costs, or simply a lower hash rate.

In simple words: I recommend you look for a cheap CPU, look it up in the list on the link I shared earlier, and calculate your profits in comparison to other CPU/GPUs you can find. It’s the best way to find your ultimate piece of hardware.

Maybe you like gambling and you don’t mind inconsistent earnings, but most miners love to earn the most they can. To do this, they often join mining pools. Although these mining pools (almost always) charge fees, they are definitely worth it, as you will always get your share, eliminating the luck-factor.

I personally recommend joining a large pool (most consistent earnings) with a low fee (more profits).

Now you’ve bought the hardware you need, downloaded & installed the software and configured it to your likings, and joined a mining pool (or not), there’s only one thing left to do: Pure Monero profit collecting.

How To Build An Ethereum Mining Rig – Beginners Guide 2022

Forks Ahoy: Why We Will Probably See A Lot More Forks

How To Choose The Best Solana Casino